How a timeline changes

So here's a funny image: 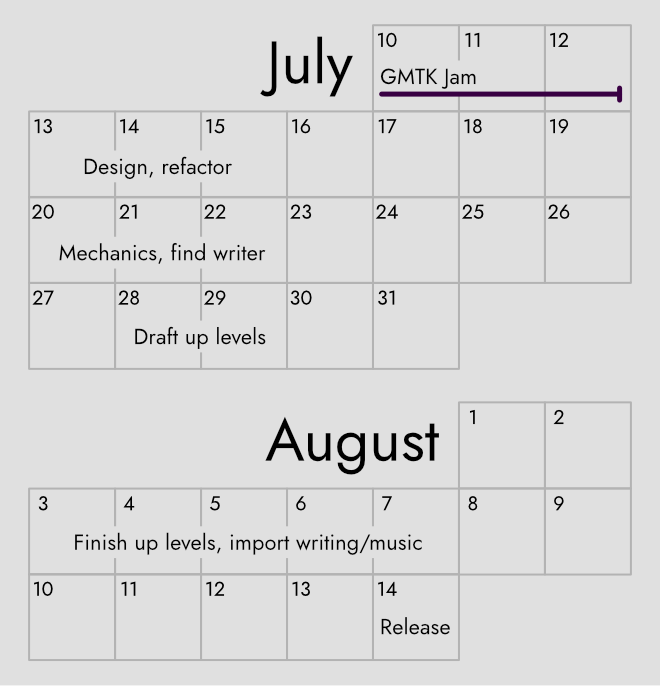 What's funny is that the development turnaround actually turned into this:

Which is a lot longer than 4 weeks! So why the huge leap?

A mixture of things, but at the core of it was a need to have just a bit longer to get some more content in - I ended up pushing the deadline some 3 times, each with pretty much the same reason:

By the time of the itch release is when I truly realised that this wasn't a 4 week game, nor an 8 week project. This could've used around an extra month - I say that because I absolutely crunched on this thing, 8am-8pm most days of the week (purely driven by high-octane "oh this is cool to make my own game" energy, satisfying that long-time hunger to do this kind of passion project)

What I thought it'd be

So: what were the major reasons for the time difference?

After finishing the gamejam, I reckoned that taking it, redoing the foundations, & setting it up in such a way as to make working in the project quick 'n easy (e.g. you can play from any scene and it works) would set me up for a very quick turnaround.

The 2nd step was figuring out the interweaving of my turnaround, with a musician & writer taking on the music 'n wordy words. By offloading "half" the game (note: like 2/4, will explain later), I could absolutely focus on the development, getting something fun when we all come together by the end of those 4 weeks.

Now there are a few major hurdles that made the 4 weeks absolutely undoable:

So yeah, in hindsight - 4 weeks was, at maximum output, an alpha or early beta version of the game (which it absolutely was)

Now, how did the final turnaround look?

Let's look at that image from earlier, but with some more notes: 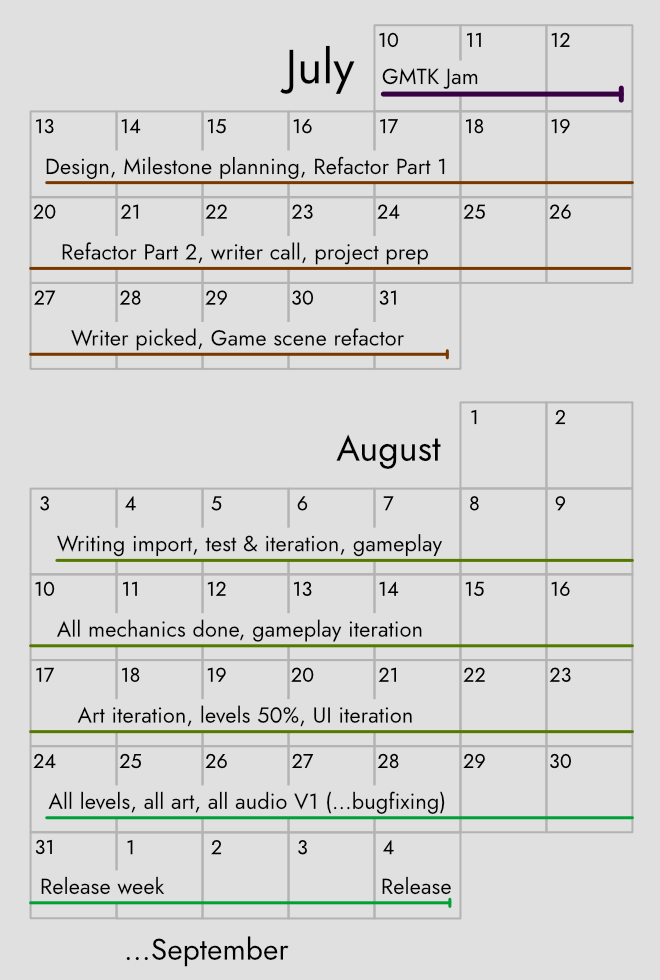 As said earlier, the driving force behind the deadline changes was for everyone involved to get more time to do stuff - in my case, it was a sheer cliff of "if I don't have an extra week, like half the game won't exist"... and then that 2 more times.

Each extra week felt like a god-send with the amount of extra time I had to use. And I think that, whilst it's a negative to have had such a tight deadline in the first place, it's a good outlook where each extension would reward so much to the game.

Smart move: don't announce until you can release

Luckily, in my case I chose not to announce a release date until the week prior to it - where the build was in a release candidate state where "if you were forced to, you would pretty happy with the state of it", and one more week of fixes/changes would've all helped in their own little ways.

Now for how I used that time: a big takeaway from this project was an emphasis on pure momentum - following the gamejam, I had my little nugget of an idea that worked. Now, it was a case of taking that forwards in every possible dimension.

Because of the energy coming off the jam, I already had that driving force to get immediately stuck into planning, design, a mini-postmortem, & so on. Taking that a step further, each week accidentally became it's own sprint:

So in essence, mondays/tuesdays would kickoff a major tech change, the rest of the week was iteration. By friday I'd have a build, then get some feedback from the team & my (very patient) friends.

Where, as someone who groans at doing a single task for more than a couple days, having the ability to flit between major tasks helped keep my interest up; and to tie it back around - my momentum. Every, single, day, had new stuff going in, and a new (bite-sized) challenge to face.

Take that across 5 weeks, and then suddenly I realised it was all together and ready to be released.

So going into this, I already thought that 4 weeks would be "long", it was my "take 1 week, double it, add on extra". I was already going into this project with an extension in mind, as I've done a fair bit of development time at work.

A Jam game is a vertical slice, not a full project

But I think what I didn't do was say "ok but how long will it actually take to do each of these smaller steps?", I had my vertical slice of gameplay from the jam; but not a vertical slice of development time for the game. I was thinking in terms of the jam rush, not across a 2 month marathon.

In my case I had a pretty well-defined end goal, which left me with a strong target of how close I was to finishing - yes it was a lot, but every node mechanic coded, each tutorial had a definite feel of being close to finishing. (Versus "oh maybe like 7 mechanics would be good" and finding out you need 2 more, I had defined "no, 9 new mechanics, 10 levels each, 1-3 tutorial steps per" in the opening salvo of planning the project)

A gist of how long some chunks took

As some rules of thumb, I found the following "big blocks" took so long:

The trick I found was to keep overlapping parts of your development; each day I made some progress in 2 or 3 "disciplines": code, design, art, bug fixes, editor tools.

Where each week/couple days had a main focus, like "ok this week is the Fuse Node", "this week is getting the menu art & functionality done", etc.

By having a main goal finished, with other parts of the game being nudged forwards, it felt like the game was just coming together naturally? This lead to the last week being relatively stress-free (compared to some deadline weeks I've experienced), because most parts of the game were done to a decent extent. What was left was bug fixes, some final QA, and adding useful extras.

So yeah, turns out making games is hard; and every, single, time, there's something that trips you up. Anyway TL; DR: