A downloadable game for Windows, macOS, and Linux

"Well, with the stage of symptoms he has, I'm afraid it's likely he's going to die in the next few months. There is an experimental treatment, but the application process is extremely stringent. If you want me to, I can see about getting you started?"

And from there, after a series of interviews, terms, agreements, and god-knows how much travel, you're here. In a sterile bedroom, with your husband in a stasis tank a few corridors away, slowly being healed of a Rot that had no cheap solution.

And now, you're a tester for some corporation, participating in an experimental trial that is doing hideous things to other people,

Your body, his life.

Would you kill for him?

This is a game that mixes a deadly FPS with an IF about selling yourself in a capitalist world.

About the pain if seeing someone you love fade away from something preventable, yet impossible to fix due to the financial cost. About the anger of having to sell your entire self to get even a trickle of notice from the corporate colossi.

The game takes it's cues from the new era of Wolfenstein, the classic FEAR, the tensity from Sicario, and layers it with the yearning poetry of Andrew McMillan.

Or, if you want to support what I'm doing as a game-maker, buy Day of Maintenance!

Made with Unity 2021.3.6, using URP, my personal code library, and the following tools/plugins/assets

I like this and would be very interested in seeing more the story is good, it could be amazing with additional content, its a smart game and i am so curious as to how the story will go and if they ever get out of that facility. top stuff

Well I didn't really expect a yaoi game to make me fervently desire to dismantle the corporate healthcare system but here we are! Damn this game did things to me while playing. I really need a part two or full version of this to finish this story. Feels like it stops right at the climax. I'm itching to see where this goes if it goes anywhere. It really is a phenomenal experience.

Story wise the allusions and parallels to some of the darker times in lgbt history are pretty strong and well done. The game serves to almost evoke the emotions of couples or individuals during those time watching loved ones and friends wither away trapped in a system designed to ignore them.

Gameplay wise its  smooth but restrictive. The gun play/combat is well there but isn't quite as satisfying or engaging as it could be. Simple additions such as adding some strained breathing to the character would go along way. Would make the gameplay a little more intense. He is locked inside a spacesuit after all. Fog on the visor, the sound of rubber squeaking, heavy boots on the metal floor would all and a sense of claustrophobia to the fps element of the game.

More advanced improvements could be tackled next. The ability to reload on command instead of at the end of the magazine. Maybe an ammo counter or a visual indicator on the side of the gun for a rough idea of how many rounds are left. Next the ability to sprint or crouch would nice but not strictly necessary. After that the only other improvement to consider is AI. They have a habit of just standing there while shooting or being shot at and shoot like bad aim-bots, dangerous but not really engaging.

All together its an extremely emotionally engaging game though (I suppose intentionally) frustratingly inconclusive. Id really like to see a full realization of this concept. Very well done BigHandInSky your game made me angry and sad in all the right ways. So I humbly beg for more.

Oh gosh what a review! Thanks so much for the thoughts and notes. The AI and gunplay is already in my notes of stuff I want to revisit, but knowing the writing resonated really warms my heart 😊

Hopefully I'm able to realise it into a grander artefact you can play in the future!

(And when you get a moment, if you can, please leave a rating to help get this game out there 🙂) 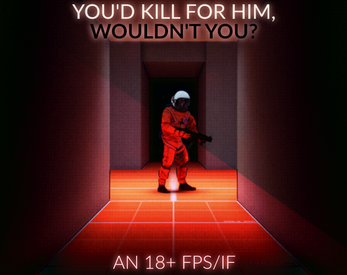